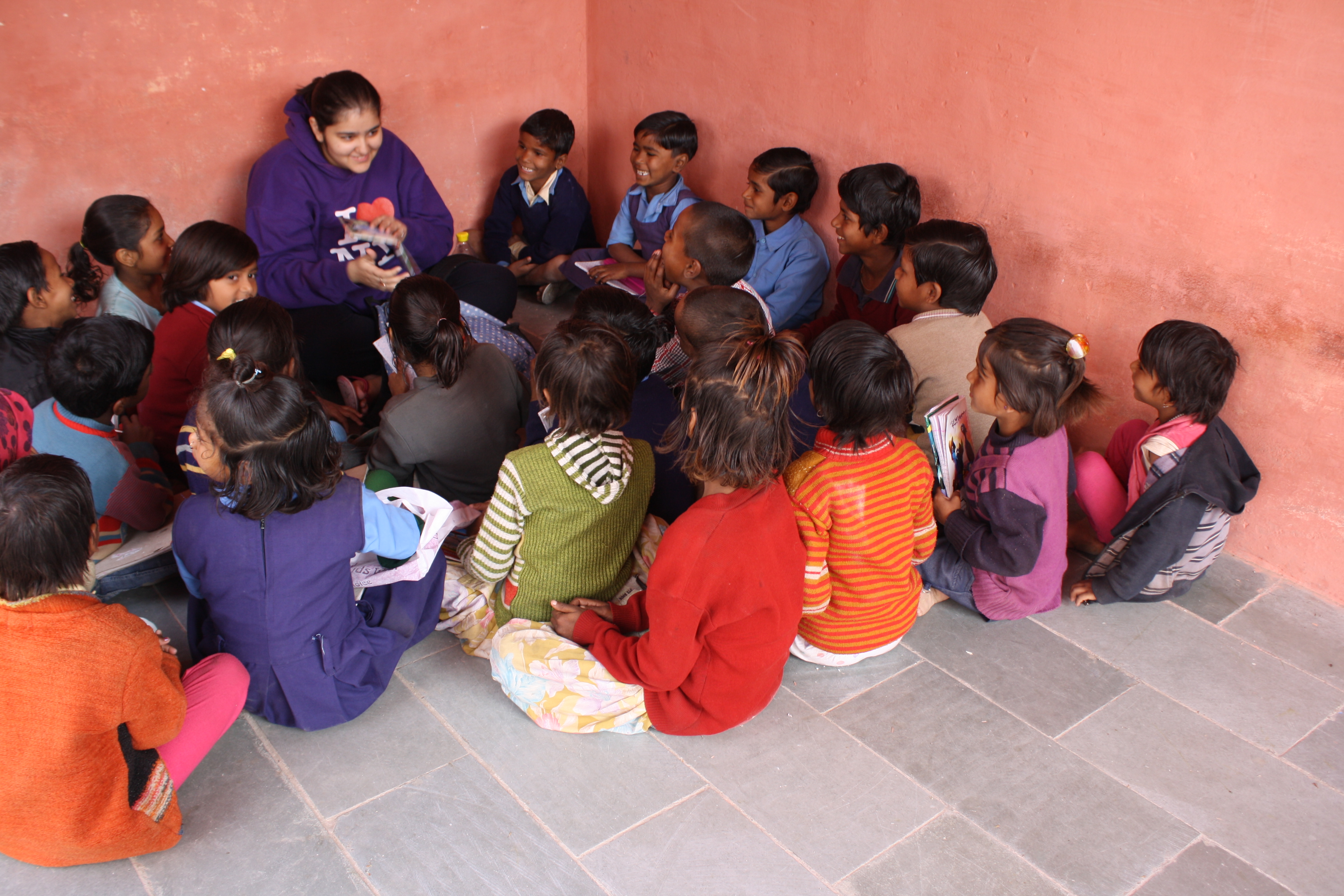 The day began a little earlier than usual. As we woke up and walked towards the window to wave at the kids, there was sadness hanging in the air as it was the last day of the wonderful trip to the village.

Amidst shouts of “school challenge, Kitaab padhenge”, we joined the kids and marched through the narrow village roads towards the school, one last time.

The kids were so excited that even before the school gates were opened, they jumped the walls and entered.

There was excitement in the air as the last day was supposed to host the “Talent Show”. Different groups trained under their respective volunteers were supposed to perform anything ranging from dances, songs to plays.

The guests invited to grace the occasion included the School headmaster and teachers.

Throughout the day, cries of joy, excitement and playful competition was noticed among the kids. Its also worth mentioning that amidst the preparations, the kids and interns also found time for playing games, cycling and clicking pictures.

What was also praise worthy was that all the kids were aware of the article on Kitaab’s Endeavor that had been published in the Rajasthan Patrika (Baarah Edition) on the same day.

As the guests arrived in the school, the children were arranged in rows and managed by the interns. As soon as he guests entered, “Good Morning Sir” echoed in the school campus and finally, the talent show began.

The youngest lot of kids from class 1st to 3rd then got up and sang the National anthem. As everyone stood up to join them, the bold voices made the atmosphere electric and a feeling of achievement and empowerment was felt.

The next lot consisted of kids from the 4th and 5th standard. They performed two Akbar Birbal plays. Having never performed in front of a crowd before, they were naturally nervous and forgot some lines. However, as soon as they made a mistake their eyes turned towards their volunteer and she rushed to their aid. Such a display of trust and mutual understanding in a matter of just 5 days was unusual and praise worthy. Ultimately, their confidence drew a huge applause from the crowd.

Following this, the 6th graders sang “We shall overcome” interspersed with “Hum honge kamyaab”. The immense confidence and joy with which they sang was overwhelming.

Lastly, the children of the 7th and 8th grade displayed an act of excellence as they performed an improvised version of an Akbar Birbal play in a mixture of Hindi and the local language, Hadoti. A thunderous applause followed and the head master and teacher were invited to speak on the occasion.

They were highly impressed and lauded the efforts of the volunteers and the kids. He emphasized that there was a huge and noticeable change in the kids and thanked us profusely. He also spoke of how we had left a deep impact on the villagers and also asked us to organize more such trips. They also highlighted how it had been a learning experience for both the sides alike.

Before ending the session, we celebrated the birthday of Niranjaan, a kid in the 7th grade. Wearing birthday hats, all of us sang for him and gifted him a basket of chocolates and a huge birthday card with our wishes written on it.

Before dispersal, chocolates were distributed among the kids and phone numbers were exchanged. The kids and interns cleaned the school premises in accordance with the “Swacch Bharat Abhiyaan”

At the end of the day, we all sat around the fire in the evening to discuss the day’s events and future prospects for    Kitaab. There was a willingness to never leave as we had accepted the village as our own.

We were also told that the Headmaster had been speechless after our show as the teachers had never noticed so much potential in the kids before. They had also realized the importance of interactive sessions over regular, rote learning.

Unanimously, we all agreed that if everyone took up a responsibility of bringing about a change and such trips were regularly organized, soon education and reading for all would become a reality.

Kitaab also sponsored a library for the school which at present, consists of a book shelf with a few books. However, we plan to take this forward and make books accessible for the kids to read because “A person who does not read wastes his entire life.”