Have you yet pondered over the source of a peacock’s magnificent tail? If yes and you are still in the process to find out the answers then a tribal folk tale from Orissa has eased your quest and terminated your search.

Read on to find your answers…

According to a tribal folktale of Orissa, it was the time when God was marveling at the beautiful world he had so zealously created. Though centuries ago, it was a purer form of the exact earth we know today.

The only noticeable difference between the two worlds was that at that time, God had created elephants with four magnanimous wings each. Just like Lord Indra, they were the favorite flying vehicles of several of our Gods. 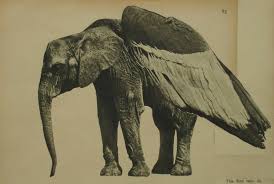 However, once He created humans and handed over the earth to them, the elephants duely lost their importance. Also, they had become a major inconvenience to the other inhabitants of the earth. Unaware of their huge size and heavy weight, when tired of flying, the elephants would relax on the rooftops of houses, resulting in their collapse. They would either begin to crow like cocks or shit like birds. All this resulted in utter chaos on the earth. 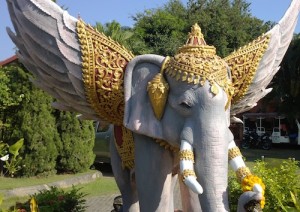 When God had had enough of this turmoil, one fine day, he ultimately called the giant beast for a feast in heaven. Stuffed with food and gradually rolling on their stomach, the elephants were eventually engulfed in deep slumber. Grabbing this golden opportunity, God quickly chopped off their wings.
As the tribal lore says, He gave two of their wings to the peacock, which is how the bird got its beautiful tail. The other two wings were stuck to the banana plant, which is how the tree got its gigantic leaves.

As for the elephants, when they woke up groggy from their sleep and realized their great loss, they turned wild with rage and fury and marched away into the forests.