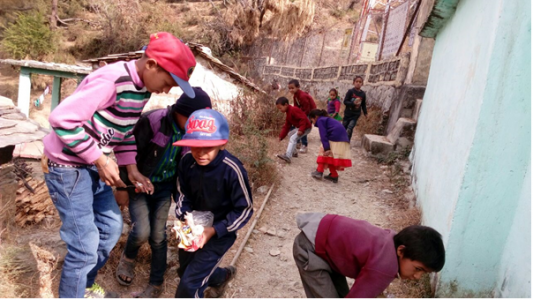 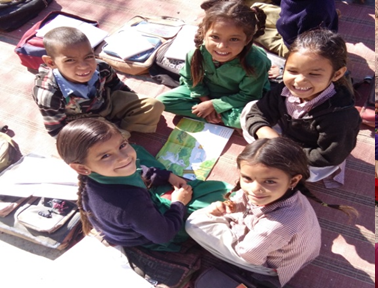 Introduction to English alphabets Because of their inability to write the alphabets after initial few trials wherein they were asked to copy from the board, photocopies of fill in the blank to form the letter were used.

Taught action songs in order to keep their attention in the classroom in definite intervals.

Introduced Colour chart and taught distinctions between colours based on objects they daily encounter. Conducted an activity based on sketching a scenery with mountains, sun, river and a house. Then they were asked to come one by one pick any colour (used a box of crayons) that they felt would be apt for the objects in the picture. For example- One student picked green for the mountains. Towards last two days they able to differentiate primary colours by identifying Blue with Sky, Green with Leaves, Black with Hair, Yellow with Sun, Pink with Flowers etc.

Video was shown in addition to demonstration via a kit prepared having basic amenities like Tooth brush, soap, oil, etc. The children appeared the next 3 days dabbed in oil which was a great sight that they were at least trying as their dry skin give way to cracks and bleeding otherwise. Every single child had a handkerchief on the last day mainly due to incentive structure.

Importance of being grateful to their parents and teachers and non-teaching staff in addition to saying Thank You/ Dhanyavaad upon receiving a gift. Students who said followed the lessons were given balloons or stickers.

Objective- Confidence building, Exploring the creative and the imaginative side

Since the previous report reflected that children had low confidence, interns were required to adopt a hands on approach to work on interaction and confidence building techniques.

Exploring the creative and imaginative side

Previous report also reflected that children were practicing rote learning and copying each other, therefore the agenda for this workshop was to enhance individual creative thought.

Over the course of eight days picture books were regularly distributed and children were asked to make their own stories based on the illustrations. Books such as “The Fox and the Stork” and “The Mouse and The Lion” were used.

This was a game that was played with the kids. It aimed to work on their concentration and recalling ability. It was earlier noticed that the children got easily distracted. In this game the children had to do actions (predetermined) which were opposite to the gestures that the intern was doing.

Prepared a scene from the book Chacha Chowdhury and the Football World Cup (excerpts) and asked the children to play certain characters. They enacted the scene quite remarkably. Although they were quite hesitant in the beginning but gradually the shyness just wore off.

During the first few days it was noticed that children lacked hygiene and would have running noses. Thus to combat this an animated video on hygiene was used to inculcate a sense on hygiene in the children. Towards day 5 and y6 there was a visible difference and children began carrying handkerchiefs to school.

Conducted an activity based on sketching a scenery with mountains, sun, river and a house. Then they were asked to come one by one pick any colour (used a box of crayons) that they felt would be apt for the objects in the picture. For example- One student picked green for the mountains. On being asked why the student said that to him they were green because of the trees.

Asked them to clean their school, kept a dustbin and asked them to throw their stuff there and not hither and thither. Kept a soap and showed them how to wash their hands properly. Informed children about diseases and their spread therefore reinforcing the need to wash hands.

Methods of story reading, interactive activities and games, poems with suitable morals and dictations were taken.

A cleanliness drive was organized for the elder students. They were shown the animated video on hygiene that was used by all interns. They were taught the importance of keeping their school and themselves clean.  They were shown basic hygiene kit which consists of toothbrush, paste, tongue -cleaner, soap, hair oil, face and body cream. A dustbin was installed in the school.

Children were unable to tell the time or understand how to even read a clock. Students were made to draw clocks and were then told how to read them. They even acted out how a clocks hands move.

Students of class 4 and 5 were unable to logically construct a story through the use of picture books hence “Panchatantra” was used. They read stories daily and discussed what they had learnt from those stories.

While the children were aware of the fact 29 states, they were unable to identify them. Therefore they were shown the map and told interesting facts about each state.

The story reading sessions exposed the children to new words. They were made to write them down along with their meanings. A dictation was also taken to improve the children’s writing skills.

Objective – According to the previous report many children did not know the proper pronunciation of alphabets or their identification in this age group. Therefore this was a major objective while working with this age group.

Children were made to introduce themselves to the entire class, poetry recitation was done in order to give the students some energy.

Books such as Greedy Dog, The Lion and the Mouse, A Visit to the Zoo were used to show the children illustrations of animals. Children identified animals and learnt the sounds they make, where they live etc.

Animated video on hygiene was shown to the students to teach them importance of hygiene. Kit was shown and students were made to wash their hands in school and clean their school.

Poems and songs were used to work on the pronunciation of alphabets. It was an effective technique as students enjoyed reciting poems.

The concept of time was not clear and therefore they were taught how to draw clocks. The intern enacted how a clocks hands move. Students were responsive to this activity.

Days of the Week

Younger children didn’t know the days of the week and therefore were introduced to the concept.

Encyclopedias were distributed amongst the students and they were asked to go through them; and select any interesting topic. The intern then explained topics the students had selected by themselves. This was an interesting activity as the class learnt about new and different things as each student had selected something unique.

Objective – Increase general awareness and confidence levels of the children. To improve pronunciation of letters and writing skills. Teach concepts of solar system and Indian states.

Activities Done – Sessions with globe, map, encyclopedias. Reading stories from “Panchatantra” and then moving on to their course books to make them understand that reading can be enjoyable whether from a story book or course book.

Since the students were learning how to identify different states in India, the intern began with a session on the Indian nation and its different states. A map was provided by the school teachers. Students made a list of the states and identified them on the map. Interesting facts about each state were shared so that the students would remember the states and their importance.

Students were also given basic information about their surroundings and their own village, district, state etc.

While the main objective was to instill a love of stories in the students, a transition was made from “Panchatantra” to their NCERT books so that students would enjoy reading both. This was helpful in inculcating and developing interest in their academics.

A globe, torch, encyclopedias and chart paper was taken to class to explain the concept of day and night, solar system, planets, rotation and revolution of planets, moon, stars and change of weather was explained to the students.

Primary as well as other colours were explained to the students using VIBGYOR. This was an interesting activity as students were associating colours with objects they had seen around themselves in the village and the books that were shown to them.

On watching the video on hygiene, students were still unaware of diseases such as malaria and dysentery. Through poems the students learnt about the ill effects of not maintaining hygiene.

Objective – Instil a love for reading for increased interest in academics, spread awareness about nutrition, basic surroundings and Indian geography.

After the video was shown, students were made to make paper bags for waste disposal. They were told the importance of keeping themselves clean. They were taught about bacteria and diseases. They were also taught how to prevent infection.

An interactive game was played to teach children the names of months and days. They were taught about the days in a year and were also taught the concept of time.

Students learn the concept of day and night and weather. They were also told interesting facts about each planet. The students of class 5 put together a skit for the younger students to show them how the solar system works.

Their creativity and imagination were put to test when they were asked to present a skit based on the stories they had read.