It was just another cozy winter evening in the blanket with a good book and a hot cup of coffee when I came across a quote by Reginald Dyer “it is only to enlightened people that that free speech and free press can be extended. Indian people want no such enlightenment.” This statement gave me some real food for thought. How true or relevant is the statement for present day India in the wake of the intolerance controversy that has gripped it?

Something happened last year something as appalling as a man in Dadri being killed on the suspicion of having eaten beef which clearly was intolerance but the rest was not. But the incident triggered a wave where the entire country seemed to talk about just one thing.People were seen talking about it in every nook and corner of the country. It was a part of online debates, news hour discussions, the road side chai pe charcha and everyone started calling India intolerant.

So what is intolerance exactly? Literally it means unwillingness to accept views, beliefs or behaviour which is different from from one’s own. That is exactly what happened in Dadri when a man had to lose his life for being suspected to have food choices which were different from others community. But after the sad incident India became obsessed with the word and everyone everywhere thought that everyone else was intolerant. When Amir Khan said he was taken aback when his wife told him that she want to leave the country because she felt it wasn’t safe for her child, she was just being a mother and he wasn’t being intolerant. When Shahrukh Khan talked about religious intolerance he didn’t deserve to be labelled a “desh drohi” or asked to go back to Pakistan. Not everything which is different from one’s own belief system is intolerance.

Media has played a pivotal role in adding fuel to this fire. It is all about how the reporting is being done. Whenever a contentious issue happens interviews of people who least deserve to be on the panel and are the worst representatives of not only religion but of humanity are taken and very controversially aired.What about reasonable stories when in West Bengal, Durga Pujo was delayed for the mourning during moharram or when a ganpati pandal in Mumbai offered space to muslims to offer their namaz?

Any immigrant based country will witness a difference of opinion among its residents which might be religious, cultural, political and the like.But isn’t this what makes India what it is? “A democracy”. If we don’t have conflict of opinions we will have stagnant thoughts and will cease to grow. So even though the bad stories tend to over shadow the good ones or India being intolerant sounds a more catchier phrase than it being  tolerant more than ever and instead of sitting and indulging in armchair activism and branding every conflict of ideas as intolerance why can’t we question the system on substantial and real issues because this futile debate is leading us nowhere. On the contrary the sole purpose of propelling the debate is to deviate us from focussing on the actual problems that requires our attention.

I read it somewhere and I quote ” we can live without food and water but we can’t live without hope.”So I like to keep my hope intact and look at brighter side of the story. We as a nation are more enlightened than ever and we deserve the right of free speech and press. We as a nation are enlightened enough to respect and accept the other person’s  opinions and also not thrust our ideas upon others. And if we are tolerant enough to go on with the debate on intolerance for so long we are nowhere intolerant. The presence of certain anti social elements cannot obviously  be eliminated but that doesn’t make India any less tolerant. 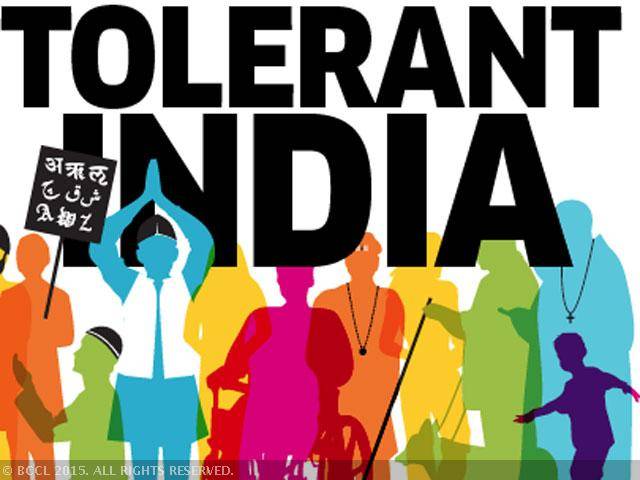